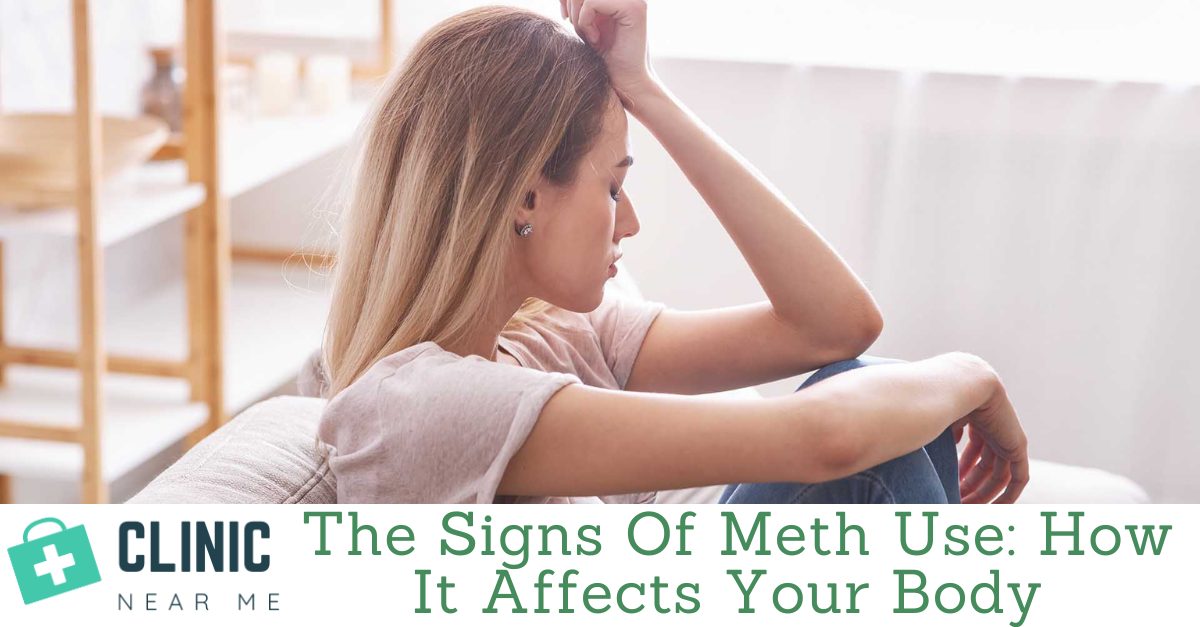 Last Updated on October 11, 2022 by ClinicNearMe

Meth is a dangerous drug that can have serious consequences for those who use it. Methamphetamine is an extremely addictive drug with long-term and short-term effects on the body. Many people who experiment with the drug become addicted because of the intense euphoric rush it provides. Even if someone is unwilling to admit to using it, there are clear signs of meth use.

When a person continues to use drugs, their life will crumble. You should be aware of the symptoms if you suspect somebody you know might be using meth and seek help for them. This post will discuss some of the most common signs of meth use.

Methamphetamine is classified as a Schedule II stimulant by the Drug Enforcement Administration, making it legally available only through prescriptions. Although it is indicated for treating attention deficit hyperactivity disorder (ADHD) and weight loss, it rarely gets prescribed, and its doses are much lower than those typically misused.

Approximately 2.6 million methamphetamine users in the United States aged 12 or older in 2020, or 0.9% of the population. Students in 8th, 10th, and 12th grades reported using methamphetamine in the past year in 2021. Overdoses caused by psychostimulants other than cocaine killed 23,837 people (primarily methamphetamine).

The drug methamphetamine was originally marketed as a nasal decongestant and bronchial inhaler as early as the 20th century. The effects of methamphetamine are similar to those of amphetamine. They include increased activity and talkativeness, decreased appetite, and a sense of well-being or euphoria.

How Does Meth Look?

The white crystallized powder is the most common appearance of methamphetamine. Also, you can press it into tablets. Despite its odorless appearance, the drug has a bitter taste and can be dissolved in water or alcohol. As its name suggests, crystal meth is a drug whose crystals resemble rocks or glass fragments.

Crystal meth is commonly known as d-methamphetamine HCI on the street. It’s no secret that crystal meth is crystalline in form, as its name implies. It is possible to crush the crystals, consume them orally, and smoke, snort, or inject them.

Meth, including crystal meth, is an entirely synthetic substance. Unlike many other illicit substances, crystal meth does not originate from plants. Toxic, explosive chemical byproducts are created during the manufacture of crystal meth.

The appearance of powered meth may vary, but it is usually a white to yellowish powder. Powdered meth is often difficult to distinguish from other powdered drugs. Powdered meth cannot be determined whether other substances have been added. It is most commonly used for snorting but can be taken in pill form or dissolved in fluids and ingested.

Liquid meth usually appears clear but can vary in color depending on its purity and cut. The appearance of a liquid does not always indicate whether it contains meth.

Injecting liquid meth straight from a syringe is also possible. A spoon or similar utensil is usually used to prepare it before it is drawn.

Meth is Used in What Ways?

Meth is commonly used as a white, crystalline powder snorted, smoked, or injected. In addition to taking it orally, it is possible to take it by injection. Depending on the dose and method of administration, the effects of meth can last for 6 to 8 hours or 24 hours.

Among people who smoke, snort, inject, or swallow meth, according to a recent study, 63% smoked, 44% snorted, and 27% injected. Almost half of all people who use meth consume it using multiple methods, and 7% use them all.

Smoking or injecting meth produces the most immediate and intense effects, but the drug can also be snorted or taken orally. Despite its use, meth has several short- and long-term effects, some potentially fatal.

Meth Addiction: What Are the Signs and Symptoms of Meth Use?

With methamphetamine use often comes physical, behavioral, and mood changes, but addiction can also result in many noticeable signs and symptoms. The following are signs of meth abuse that you should look for in someone you care about:

Meth addiction symptoms can manifest physically in the following ways:

When meth use begins to show serious physical signs, it is important to seek help immediately.

Methamphetamine, also known as meth, is a powerful and addictive stimulant. It can have significant effects on a person’s behavior. People who use meth may become more aggressive, violent, and paranoid. They may also experience changes in their mood and energy level.

Some people who use meth may also develop psychotic symptoms, such as delusions and hallucinations. Long-term meth use can significantly change a person’s brain structure and function. These changes can result in memory problems, difficulty thinking clearly, and impaired motor skills.

Among the behaviors of a meth addict are:

A person’s life becomes consumed by meth as they continue to use it. Their addiction will eventually dominate everything they do.

Methamphetamine, or meth, is a highly addictive stimulant drug that can severely affect a person’s mood and behavior. According to the National Institute on Drug Abuse, meth causes a “rush” of pleasurable sensations, followed by an intense high lasting for hours. This high is often followed by a period of extreme lows or “crashes.”

These mood changes can be so severe that they lead to serious problems in a person’s life, including relationship difficulties, financial issues, and legal troubles. Meth use can also lead to paranoia, delusions, and hallucinations. If you or someone you know is using meth, it’s important to seek help from a professional treatment program as soon as possible.

Signs of someone doing meth use can cause mood changes such as:

A person who seems particularly emotional or whose mood seems off could have a meth addiction. An addict’s mood often worsens as their addiction progresses.

Tweaking is one of the more obvious meth addiction symptoms. It occurs when someone experiences insomnia and anxiety for an extended period – often three days or longer. Tweaking occurs because the person is coming down from a meth binge and can no longer achieve their desired high.

The person may not sleep for several days and become paranoid, anxious, and irritable. Tweaking can be an extremely unpleasant experience and can lead to dangerous behavior. If you or someone you know is experiencing meth addiction, it is important to get help immediately. There are many resources available to help you through this difficult time.

Meth paraphernalia is a common sign of meth use in a house of addicts. Common items include lighters, syringes, pipes, and razor blades. Often, meth users will also have burns on their fingers or lips from where they have been holding the pipe while smoking meth. Burns on the lips can also be caused by using a meth pipe that is too hot. Meth users may also have track marks on their arms from injecting the drug.

While some of this meth paraphernalia may be easily identifiable, other items may not be so obvious. For example, small plastic bags or containers can be used to store meth and may be found in different places around the home. These bags may also contain other drug paraphernalia, such as syringes or pipes.

Meth paraphernalia is a tell-tale sign that your loved one uses methamphetamine. Each method requires equipment, whether an injection, a snort, or a smoke. Paraphernalia signs of meth use in the house include:

These items may be hidden or left in plain sight by someone abusing meth. Any time you find meth paraphernalia in their home, car, or room, it may be time to intervene.

Methamphetamine, or meth, is a highly addictive stimulant drug with severe consequences for people on meth before and after users. Meth use can lead to problems in several areas, including mental and physical health, work, school, and relationships, including paranoia, delusions, and hallucinations.

Meth can also cause physical health problems like liver damage and tooth decay. In addition, meth use can lead to problems at work or school and damage relationships with family and friends.

How to Deal with Someone Who Is Using Meth

The dangers of methamphetamine are numerous and can quickly consume a person’s life. Recognizing early signs of meth use allows you to intervene earlier rather than later, potentially saving their lives. You can help someone who is abusing drugs:

What does meth do to your body?

The effects of meth can be severe on your body because it is a powerful stimulant. Psychosis or a break from reality can increase heart rate and blood pressure. Your liver, brain, and other organs can also be damaged by meth. Long-term meth use can lead to addiction and even death. If you or someone you know is using meth, it’s important to get help immediately. Many resources are available to help you get on the road to recovery.

How to tell if someone is on meth?

There are a few things to look for if you’re wondering if someone is using meth. First, they may have drastic changes in their appearance. They may lose a lot of weight, have sores on their skin, and their teeth may be rotting. They may also be hyperactive, sweat a lot, and have trouble sleeping. If you’re concerned that someone you know is using meth, it’s important to talk to them about it.